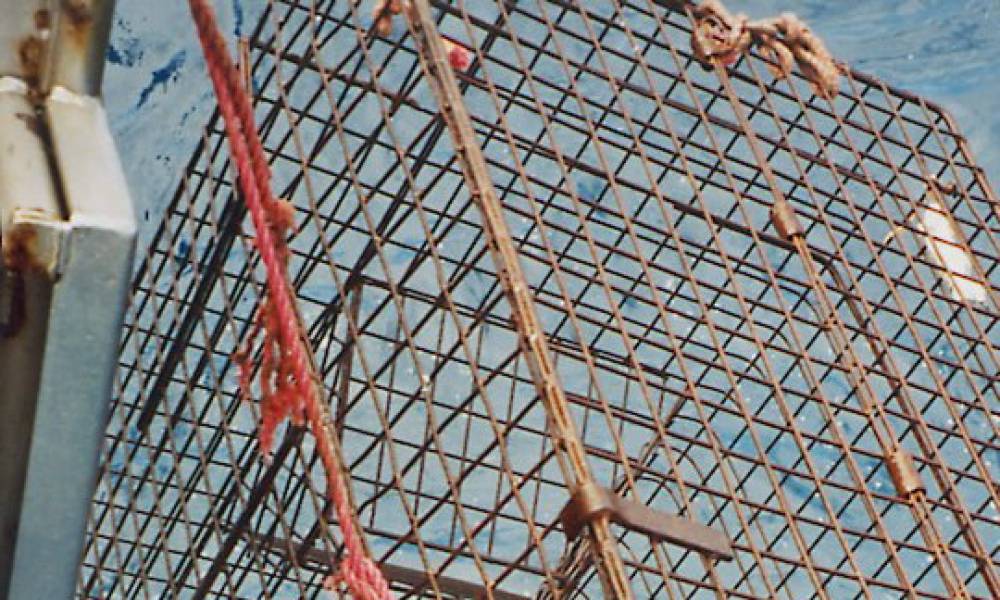 Depending on who's data you believe there seems to be a growing awareness that the species that appear on most menus and the fishing methods employed for these fish are simply not sustainable.

Not too far down the track we will be increasingly turning to fish that during my early cooking career chefs wouldn't dare put on the menu. The price we are paying for a lot of fish is alarming but still may not truly represent the scarcity, but Ocean Jacket and Coorong Mullet are my two fish of choice for menus at the moment.

But I'm not just talking about any old Ocean Jackets, as there are a lot of cheap imports. For a fish to be sustainable it is not just the species that needs to be accounted for but the way the fish is caught and who is doing it.

Sea Rover Wild Catch Fisheries trap their Ocean Jackets a few hours out of Coffin Bay. What interests me about this (largely time consuming and now unpopular) method of fishing is the potential for almost zero by catch. Have a look at the photo, the cage is ZERO bycatch and that's important if you care about the oceans. You chuck the trap (a cage really) down, put something tasty in it and pull it back up. If anything else has hopped in the trap (any undersized Jackets or different species) they are undamaged and can be popped back in, this is a vastly different scenario to trawling. Hugh Bayly at Sea Rover reckons this way he can target fish two to four years old and furthermore the ocean floor is completely undamaged. This takes a fisherman who knows his craft and cares that the species he is chasing will be around for his kids to fish.

The fish itself is also completely unbruised so that tight little texture and close grain are in perfect condition. The time from catch, processing and subsequent delivery to market is also what makes a small scale local product just fresher and better tasting.

It's one thing that we have a renewable sustainable family business pulling these little guys up but are they tasty? The answer is yes, the trunks are skinned when they hit the vendor so that misconception of how difficult they are to clean is irrelevant. They are difficult to fillet but who cares, nothing tastes better than a fish cooked on the bone so just roast the whole trunk which is essentially the fish without a head. Hugh's fish are available at International Oyster and Seafoods and Samtass Bros Seafoods, so get "googling."

The other interesting operation is Coorong Wild Seafood. Glen Hill has been chucking a fishing net nearly 20 years. This is a guy who is passionate about the sustainability of the Lakes and Coorong. I went out with Glenn and by gill netting he can target the exact size and species that he is chasing. This takes years of experience to know where the fish are running and at what depth (and even what the local pelicans are up to, which will also determine the depth that the fish are swimming). When that net comes up any small fish have been able to swim straight through so no issue with anything undersized being pulled. The systems that are being used by the fishery have earned the stringent Marine Stewardship Council's (MSC) certification for four species they fish.

The fish I like best is the Coorong (yellow eye) Mullet. This tastes so much sweeter than any other mullet and is one of South Australia's most under rated fish. This is due to the salinity in the Coorong and the unique local food sources it feeds on. You can get whole fish or if you have an aversion to too much work or bone just grab the butterfly fillets. The fish has a firm texture, good level of omega 3 and 6 and has an excellent moisture content which gives a good margin of error when cooking.

Sea Rover Ocean Jacket trunks are available at Samtass, Cappo Seafood and Angelakis Bros in Adelaide, so not excuse not to give them a try.

serves 2 as a main course

Remove the heads of the enoki mushrooms and set aside with the ingredients for the "garnish". Halve garlic and onion, roughly chop leek and daikon. Place in 1.5 litre pot with dried shiitake mushrooms, enoki mushroom stems and water. Simmer for 30 mins, add the anchovy and kombu, simmer a further 30 mins and strain, reserve the shiitake mushrooms.

Add miso to the strained stock and whisk until dissolved, keep warm.

Heat sake, mirin and sugar, then flame. Once the flame has cooked out, remove from heat and stir in miso paste. Dip the fish segments into the miso marinade. Then place fish in 180°C oven for about 12 mins to cook through.

Heat soup with noodles, mushrooms and pinch of wakame. Place the noodles in the centre of the plate and ladle the hot soup over. Rest roasted ocean jackets on top of the noodles.